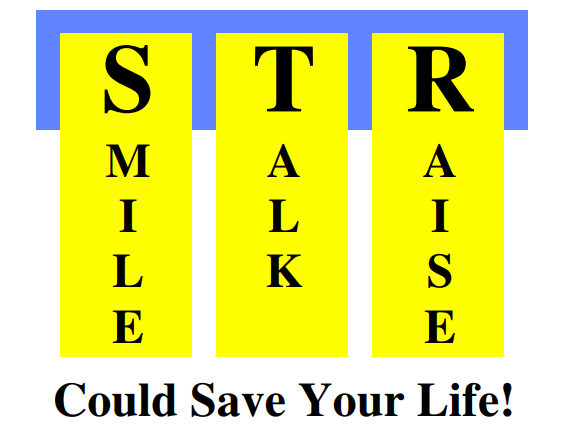 During a BBQ, a friend stumbled and took a little fall, she assured everyone that she was fine (they offered to call paramedics)…she said she had just tripped over a brick because of her new shoes…
They got her cleaned up and got her a new plate of food. While she appeared a bit shaken up, Ingrid went about enjoying herself the rest of the evening….
Ingrid’s husband called later telling everyone that his wife had been taken to the hospital (at 6:00 pm Ingrid passed away.) She had suffered a stroke at the BBQ. Had they known how to identify the signs of a stroke, perhaps Ingrid would be with us today.

It only takes a minute to read this. A neurologist says that if he can get to a stroke victim within 3 hours he can totally reverse the effects of a stroke…totally. He said the trick was getting a stroke recognized, diagnosed, and then getting the patient medically cared for within 3 hours, which is tough.

Thank God for the sense to remember the “3” steps, STR. Read and Learn! Sometimes symptoms of a stroke are difficult to identify. Unfortunately, the lack of awareness spells disaster. The stroke victim may suffer severe brain damage when people nearby fail to recognize the symptoms of a stroke. Now doctors say a bystander can recognize a stroke by asking three simple questions:

S: Ask the individual to SMILE.
T: Ask the person to TALK and SPEAK A SIMPLE SENTENCE (coherently) i.e., “It is sunny out today”).
R: Ask him or her to RAISE BOTH ARMS.

If he or she has trouble with ANY ONE of these tasks, call 166 (GR)/ 911 (US) immediately and describe the symptoms to the dispatcher.

New Sign of a Stroke: Stick out Your Tongue

Another sign of a stroke is this: Ask the person to stick out his/her tongue. If the tongue is crooked (if it goes to one side or the other), that is also an indication of a stroke.

A cardiologist says if everyone who reads this and sends it to at least 10 people they care about, you can bet that at least one life will be saved.